Discuss the latest Johnny Depp news, his career, past and future projects, and other related issues.
23 posts

Johnny Depp Says Cancel Culture Is “So Far Out Of Hand” & “No One Is Safe”, Asks People To “Stand Up” Against “Injustice” – San Sebastian

Johnny Depp went on the record today saying that he is a victim of cancel culture and that “no one is safe” from the movement, calling on people to “stand up” for people facing “injustice”.

“It can be seen as an event in history that lasted for however long it lasted, this cancel culture, this instant rush to judgement based on what essentially amounts to polluted air,” he commented during a press conference ahead of receiving the honorary Donostia Award at this year’s San Sebastian Film Festival.

“It’s so far out of hand now that I can promise you that no one is safe. Not one of you. No one out that door. No one is safe,” he continued. “It takes one sentence and there’s no more ground, the carpet has been pulled. It’s not just me that this has happened to, it’s happened to a lot of people. This type of thing has happened to women, men. Children have suffered from various types of unpleasantries. Sadly at a certain point they begin to think that it’s normal. Or that it’s them. When it’s not.”

In what appeared to be a reference to his high-profile libel case with UK newspaper The Sun over its branding of him as a “wife-beater”, which he lost last year, Depp said, “It doesn’t matter if a judgement, per se, has taken some artistic license. When there’s an injustice, whether it’s against you or someone you love, or someone you believe in – stand up, don’t sit down. ‘Cause they need you.”

The UK verdict prompted Warner Bros to drop Depp from its Fantastic Beasts franchise. The star has a blockbuster $50M defamation lawsuit against ex-wife Amber Heard scheduled to go to trial in the U.S. next year; Heard is pursuing a $100M counterclaim. More on that here.

Depp was fairly low-energy during the presser but seemed willing to engage with attending press, clapping everyone in the room when he arrived, and didn’t appear to have an issue with addressing sensitive topics, which tend to dog the actor at this stage in his career.

The festival, however, was having none of it. The next question from press addressed the criticism of the fest for handing Depp a Donostia, particularly from Spain’s Association of Female Filmmakers and Audiovisual Media, which released a statement saying the award “transmits a terrible message to the public”.

Before Depp could open his mouth in response, the host of the conference rejected the question out of hand and told press in the room to stick to questions about the actor’s career.

Depp later admitted that he was “worried” that his presence at the festival this year “would offend people” and that he “didn’t want to offend anyone”. He praised the event, its director Jose Luis Rebordinos, and the mayor of San Sebastian for their “undying support” and for “not buying what has been, for far too long, some notion of me that doesn’t exist”.

“I haven’t done anything, I just make movies,” Depp added.

The actor was allowed to respond to a question about his view on the film biz in 2021. “Hollywood is certainly not what it was,” he responded. “The studio system, the grudge matches, the pandemonium and chaos of cinematic releases to streaming… it is a case of, ‘no matter what, I’m going to get mine’. That’s where these people are coming from.”

“They realize they’re just a disposable as I am. Some more so,” he continued. “Large, large corporations take control of these things. As someone who takes part in the creation of cinema, how much more formula do we need from the likes of studios? How much more condescension do we need as audiences? I think that Hollywood has grotesquely underestimated the audience.”

It was evident during the presser that the room was filled with Depp fans. Indeed, the actor’s reputation seems to have taken less of a hit in European countries, in comparison with the U.S. and UK (where he admittedly he still has plenty of fans).

At one point, he was asked about the future of his famed part Captain Jack Sparrow, with Depp responding that the character would never leave him, and that no one could ever take the character away from him. Depp then delivered an impromptu Jack Sparrow rendition on the stage, much to the delight of the attending crowd.

That's actually a good write up - how many journals are going to repeat the lie that the recording of AH on the steps outside court interrupted the press conference - not true apparently there was no interruption.

How typical of WB to release news about FB3 today - so glad to see JD is trending with it and of course all negative for WB. They really need to fire their social media team, poor loves cannot catch a break.
Top

Johnny Depp Unveils Development Fund Between His London-Based IN.2 and A Contracorriente in Spain

In San Sebastian to receive the festival’s highest honor, the Donostia career achievement award, American actor, producer and director Johnny Depp has announced his involvement in a new development fund for film and TV projects, headed by his own upstart London-based IN.2 Films and Adolfo Blanco’s Contracorriente in Spain.

IN.2 is Depp’s newly-launched U.K.-based production house, born from his L.A.-based Infinitum Nihil, which is courting scripts for films, stage productions and plays “focusing on European sensibility combined with American accessibility,” explained a release handed out during a San Sebastian press conference.

Producers Stephen Deuters (“Minamata”) and Stephen Malit (“Hector”) are also joining IN.2 as co-heads alongside Depp, and were in person in San Sebastian to jointly announced the new development deal with A Contracorriente.

In the release, Depp explained: “From the student to the maestro, from the aspiring artists to the yet-knowns, to the well-established great masters across all forms of modern media, IN.2 will build a space where artists can be artists, where they will be free to create those unexpected moments, those happy accidents that contain the propensity to constitute great art and so bring their unique vision to life.”

Referencing the new development deal, Blanco added that “We are delighted and proud to be working with Johnny Depp and his partners on this project, which is so timely for the new times, marked by a changing model in our industry. Being able to identify and produce films with the ability to target specific audiences will be key to remaining competitive.”

Depp and IN.2 are also planning new projects with Julien Temple, who directed the Depp-produced “Crock of Gold: A Few Rounds with Shane MacGowan,” which played at last year’s San Sebastian.

Depp is becoming something of a regular at the Basque event. This year, Depp was honored with the festival’s prestigious Donostia Award, the festival’s top honor given in recognition of his prolific career. At a pre-ceremony press conference, Depp reflected back on his three-plus decades in the industry, while avoiding questions about his personal life.

I've put the images below including a pic of them all together.
► Show Spoiler 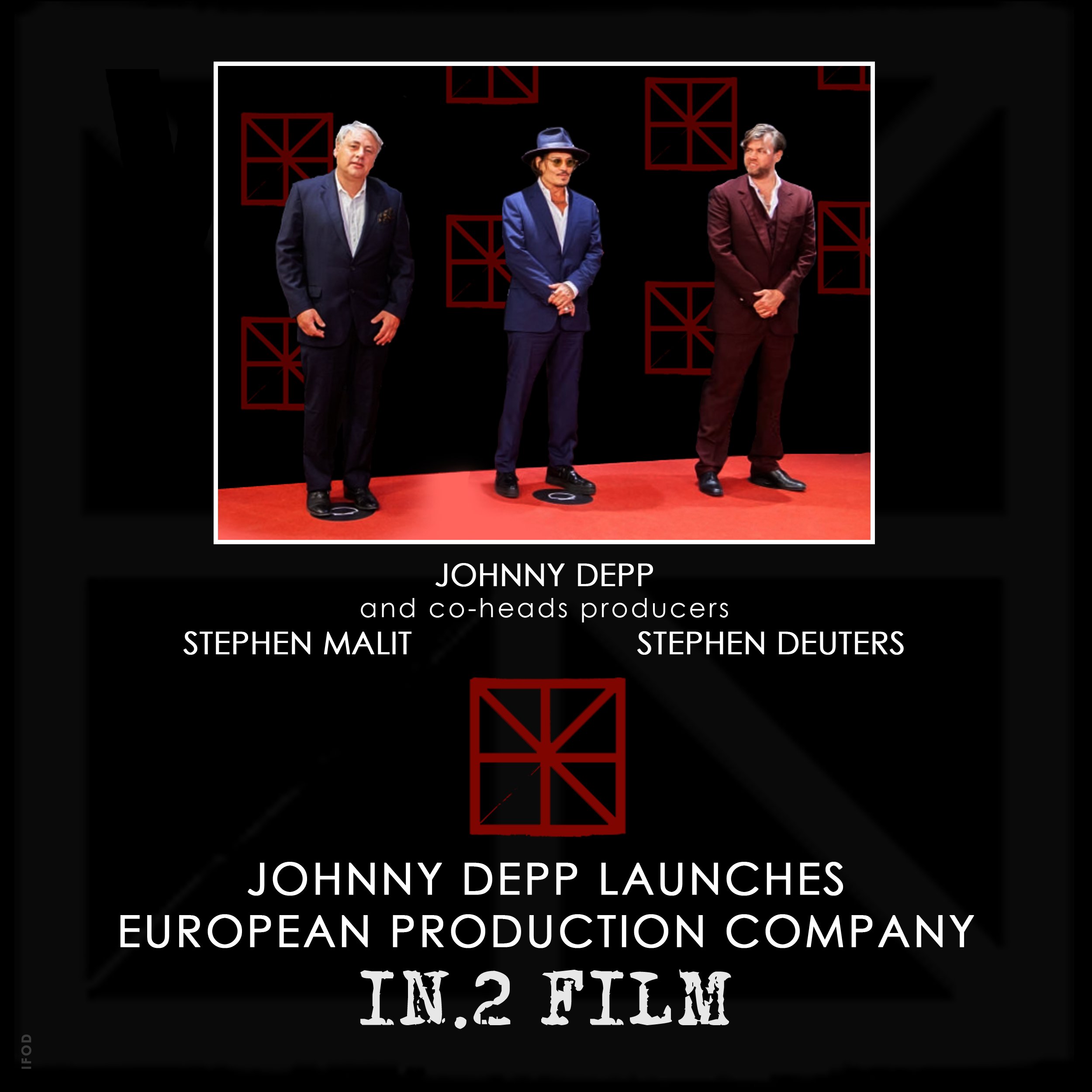 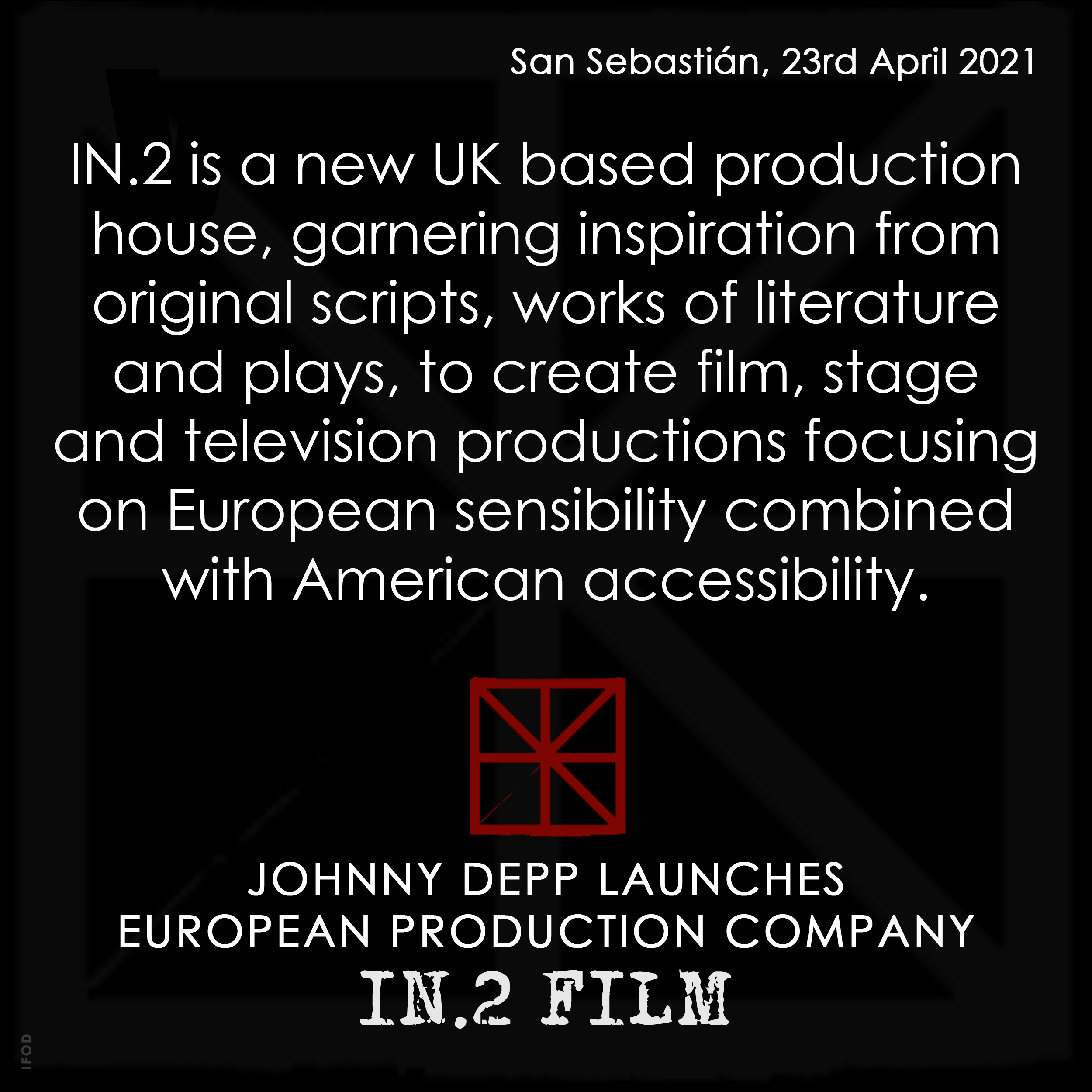 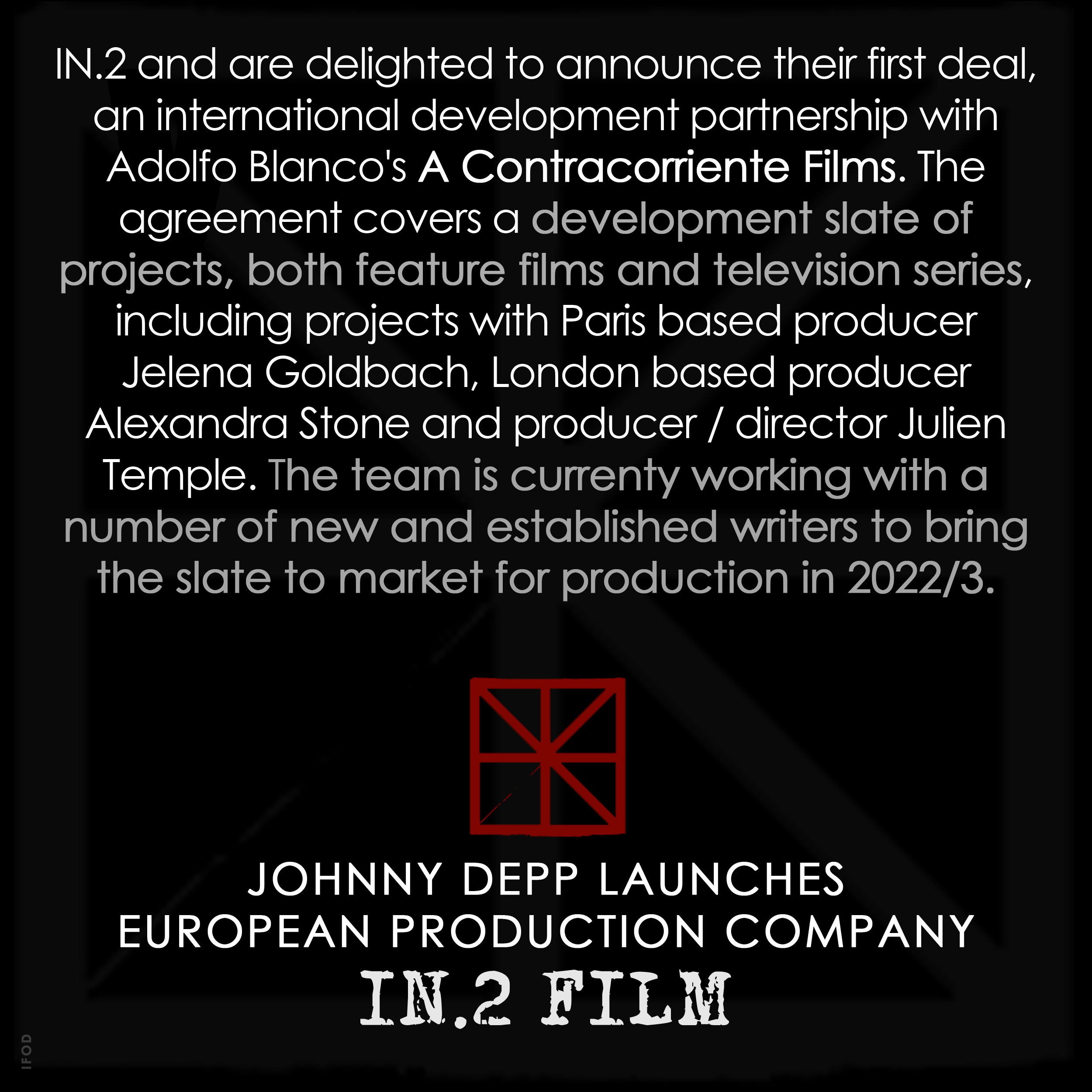 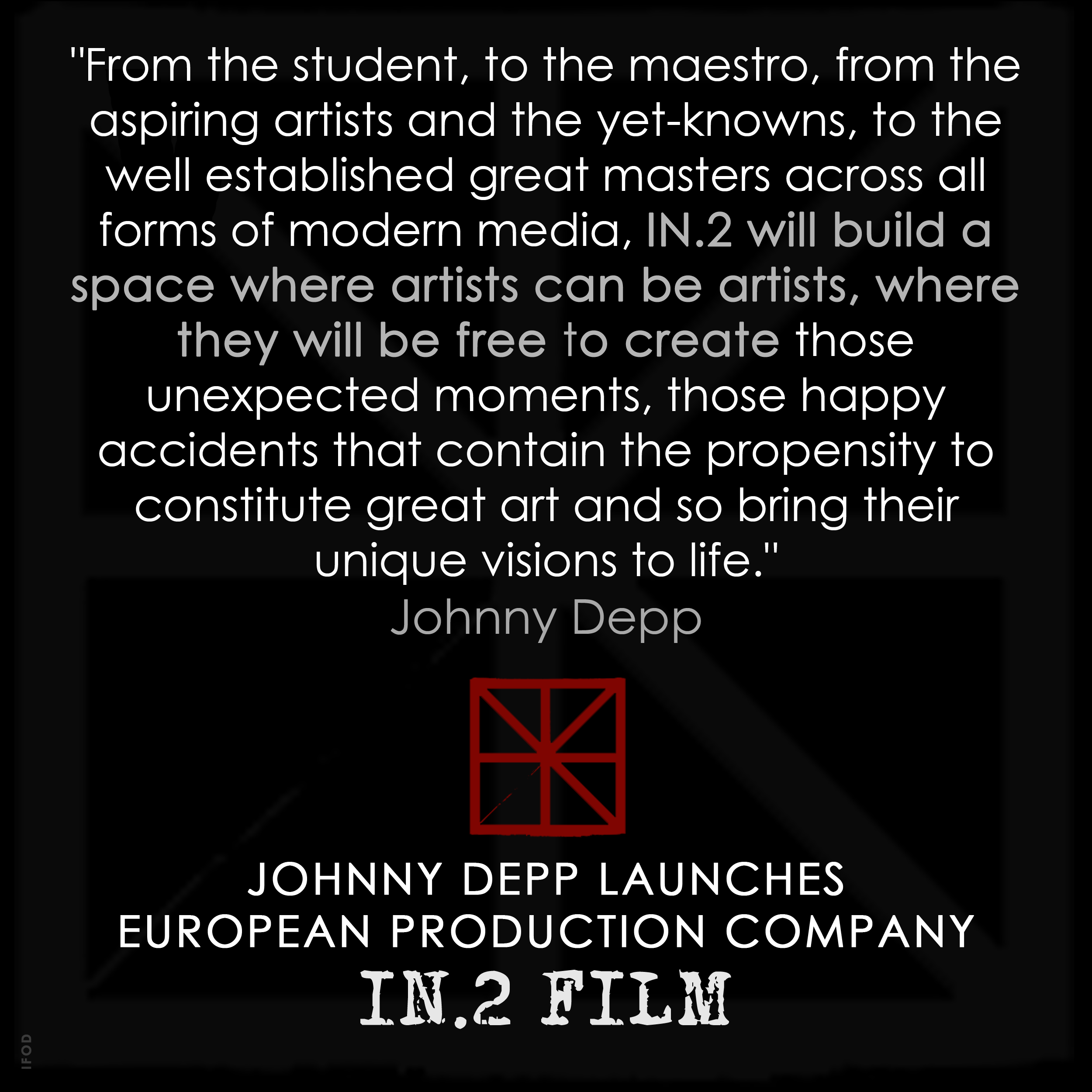 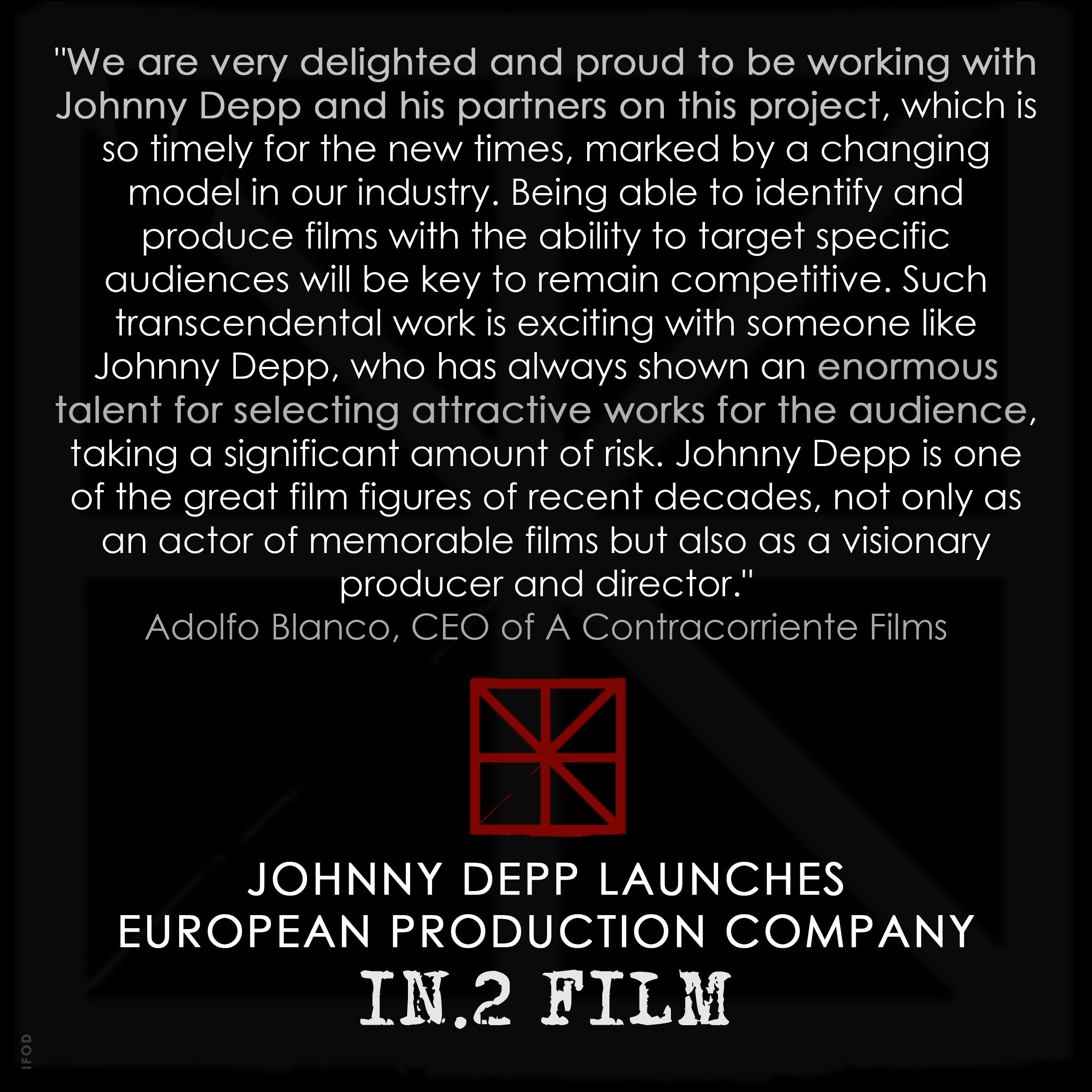 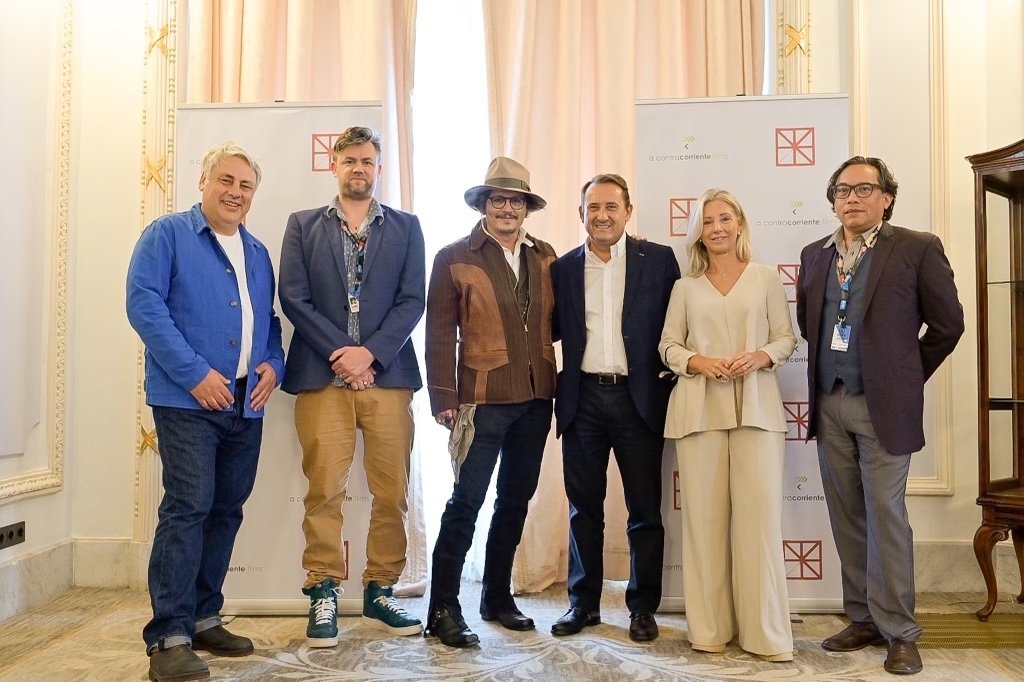 I watched Johnny's interview on You Tube. It is almost painful to watch him searching for just the right words when he talks at these events. But so lovely to see him!
Top

AdeleAgain wrote: ↑
Wed Sep 22, 2021 5:14 pm
That's actually a good write up - how many journals are going to repeat the lie that the recording of AH on the steps outside court interrupted the press conference - not true apparently there was no interruption.

How typical of WB to release news about FB3 today - so glad to see JD is trending with it and of course all negative for WB. They really need to fire their social media team, poor loves cannot catch a break.

This isn't the thread for this but WB (and yes I do not like the studio right now and what they did to Johnny) releasing a surprise title drop for FB has nothing to do with Johnny. Being a Johnny Depp and a Wizarding World fan, I realize I'm probably an outlier here but I would love it if we could cool it on the dissing there of the FB films.
Top
23 posts