Discuss the latest Johnny Depp news, his career, past and future projects, and other related issues.
279 posts 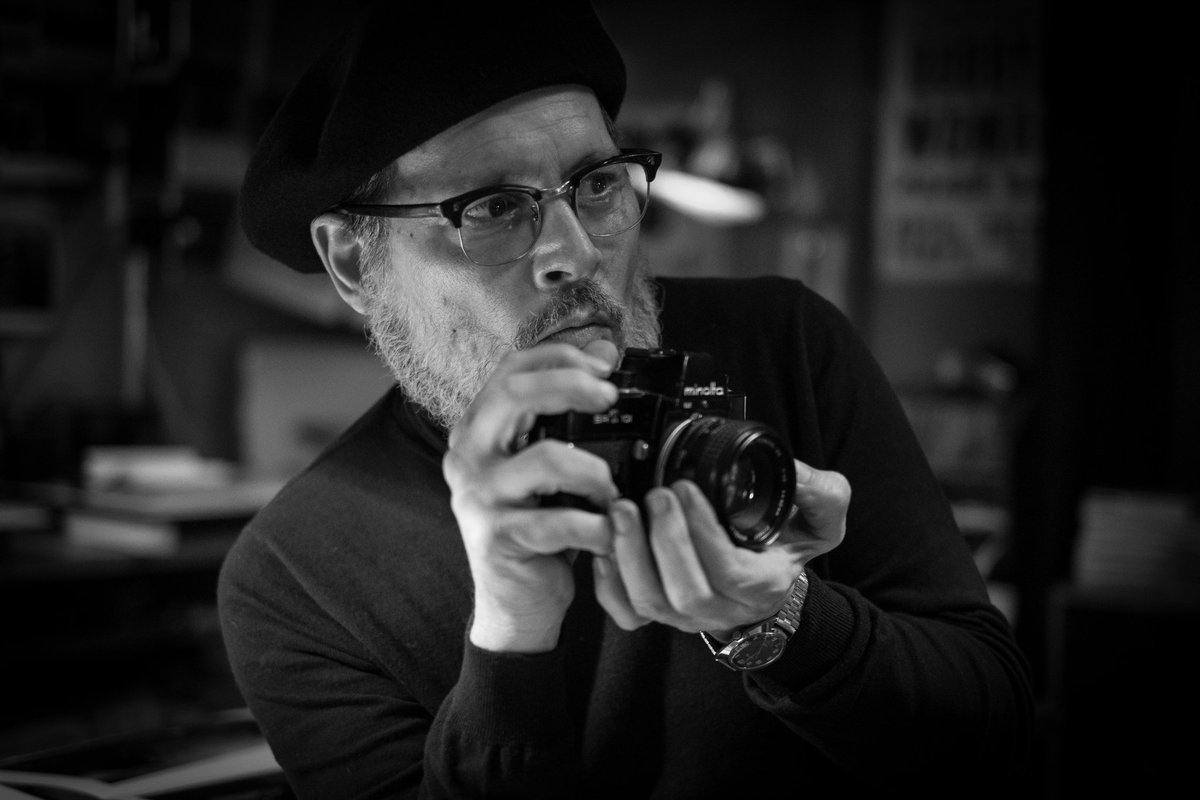 Oh my god, what a beautiful photograph.
I love this movie
Top

Minamata opened in Australia yesterday.
It is a bit hard to find as not showing in the main arts/independent chain and only a few cinemas of major chain.
(I saw it at an independent cinema that I usually don't visit as $24 adult tickets.)
The film has good reviews. Reviewers are positive on Depp performance but make a negative comment about his personal life.
Sydney Morning Herald review

Whatever you think of him, Johnny Depp acts here with grace and grit
By Paul Byrnes

For those of a certain age, the word “Minamata” may evoke an immediate and jolting memory – a series of photographs of the bent bodies and staring faces of children born with gross deformities from mercury poisoning in a fishing village in southern Japan.

The exposure of their plight by American photographer W. Eugene Smith is one of the great stories in the history of documentary photography. Smith and his Japanese-American assistant Aileen (who became his wife) lived in the village for two years, from 1971 to 1973, during a campaign for justice by the families.

The company, Chisso Fertiliser, fought hard and dirty to avoid responsibility. Smith’s photographs, when published in Life magazine in 1972, turned the tide.

That story would have scared any producer, even with its David and Goliath dramatic structure: you wanna make a movie about deformed children? In the end, the film has been patched together from disparate funders, and its non-mainstream backing may have helped it retain a certain artistic integrity.

It’s an unconventional take on the western: an ageing gunfighter (with cameras instead of guns) arrives in a town full of trouble. The bad guys pick the wrong guy to beat up. He doesn’t believe in anything any more – which makes him dangerous. The fight takes its toll on both the reluctant hero and the village. Change it to swords and you have Seven Samurai, Akira Kurosawa’s 1954 take on the western. Add an unhappy kid with bent fingers and you have a cousin of Shane.

Whatever one thinks of Johnny Depp – and he is doing a great job of alienating his fans – this performance is full of grace and grit. No doubt he relates to aspects of the character. Gene Smith was a famously grumpy photographer even before Minamata. He had been blown up covering the Pacific war; his recovery, through a series of operations, took two years. He more or less invented the photographic essay after the war, and he fought with most of his editors and colleagues when they disappointed him, or he them. By the late 1960s, he had left his wife and children to live in a New York loft, photographing the streets through peepholes in blacked-out windows rather than going outside.

That’s where he’s living, in a haze of alcohol, cynicism and painkillers, when a beautiful young Japanese translator named Aileen (Minami) demands that he rejoin the human race: you must come to Minamata, the people need you. His editor at Life, played with weary exasperation by Bill Nighy, agrees to the trip – thinking it might be Smith’s last.

It’s an unconventional take on the western: an ageing gunfighter (with cameras instead of guns) arrives in a town full of trouble.

The film does not quite move in conventional steps, and when it does, they aren’t always convincing, but that’s to its advantage. It makes it feel less slick. Once in the fishing village, Smith realises that no one wants to be photographed. They especially don’t want him to photograph their sick children. That turns the film into an examination of the role of still photography in the 20th century up to this point, and the idea that its primacy was coming to an end.

Nighy’s character is trying to keep Life magazine afloat against the new media forms – particularly television – that show the world in moving images and colour. Eugene Smith’s form of genius – black-and-white and 35mm – was on the way out. Minamata becomes, in that light, not just his last hurrah but one of the last great milestones of the silver nitrate world. The fact that the director, Andrew Levitas, has built an international career melding sculpture and photography might explain his attraction to this story, and the reason it has some layers.

Levitas recognises the power of a single photograph in the structure, which starts where it means to end. The Minamata photographs are famous for one particular image, the heart-breaking portrait of a woman bathing her frail, bent-limbed child in a traditional Japanese bath. It is a portrait of great tenderness and love, but it’s also a picture of a photographer’s rage. The film becomes, at least below the surface, an explanation of the trust that was required to make that image. And the betrayal of trust that required him to make it in the first place.

Does anyone know where and when we can see this movie? I don't see it playing in NYC.
Top

It's not due to open in the US until September 2021. Something about being eligible for awards.
"Some books are to be tasted, others to be swallowed and some few to be chewed and digested." Sir Francis Bacon, Of Studies
Top

It's a great review - I am not sure I would agree JD is alienating his fans, I rather think he's consolidated his international treasure status in the last couple of years - the review might want to plug into social media comments about him. But never mind.
Top

Thanks for that news fireflydances.
Top

I'm not good in reviews, but ... this is a masterpiece.
Joel:"That's the movies, Ed. Try reality." Ed:"No thanks." Northern Exposure
Top

Your four little words, ibbi 3, say more than Mr. Byrnes’ struggle to do the film justice without showering too much (deserved) praise on JD. Thank you! Can’t wait to see it.
"Stay low." ~ JD
"I don't like it in here . . . it's terribly crowded." ~ Hatter
"There's something about Johnny that breaks your heart." ~ John Logan, ST
"Tear deeper, Mother." ~ Wilmot
Top

Your four little words, ibbi 3, say more than Mr. Byrnes’ struggle to do the film justice without showering too much (deserved) praise on JD. Thank you! Can’t wait to see it.

It's available on iTunes HK ! You can create an account on there, then find a HK iTunes gift card and there you go !
Top

Will need it to marinate some more before determine if this is a masterpiece but it might well be.

I liked Levitas' previous film (this is his second feature) Lullaby but never could have imagined that he had this in him. First things first: Johnny does a vanishing act once again ! This is truly unlike anything he's done before. He's exceptional and this is an Oscar vehicle if MGM (and I guess Amazon since they own MGM now) gives the film a serious push come award time.

Minami, Sanada, Nighy and the rest of the supporting cast is really superb.

It's one of those quiet, delicate, generous and soulful films, so soulful. And everything meshes together to perfection. From Benoit Delhomme's tactile and intimate cinematography to Levitas' pitch perfect, unflinching and deeply human direction, to Ryuichi Sakamoto's haunting score, the cast, etc.

And some specific scenes are so full of grace, some of the most beautiful moments I've seen yet on film (well, digital in this case ^^). There's two scenes in particular - those who saw it hopefully will agree ^^ - the one where Eugene and Aileen arrive in Minamata, then Eugene takes a walk in the street and takes photos of Shigeru playing his accordion, then Aileen reading the documents to Eugene outside the factory, his back turned, out of focus as we slowly push in. My god.

And it just so happens that it's also food for the mind and a really important topic being explored. This should be mandatory viewing.

MGM has a serious awards contender here if they put in the work.
Top

Yeah, turns out it is a masterpiece. There's a Blu Ray being released on August 31st in Spain but the back cover only shows Spanish subtitles. So that will be a problem for the Japanese portions. Australia should be next to get a Blu Ray release.
Top

Poking around tonight I found three different articles about how MGM is burying the Minamata release in the US. I remember the original delay back in February but I am absolutely horrified that those of us in the US may have wait even longer to see this film. I am including the links below:


If this is true, can the Deppheads unite behind the release of this film in the US? Can we do anything?
"Some books are to be tasted, others to be swallowed and some few to be chewed and digested." Sir Francis Bacon, Of Studies
Top

fireflydances wrote: ↑
Mon Jul 26, 2021 9:36 pm
Poking around tonight I found three different articles about how MGM is burying the Minamata release in the US. I remember the original delay back in February but I am absolutely horrified that those of us in the US may have wait even longer to see this film. I am including the links below:


If this is true, can the Deppheads unite behind the release of this film in the US? Can we do anything?

For what it's worth, there is a social media campaign calling for MGM to release the movie in the US.
Top

Well done Lbock for getting the troops going - I had every confidence I would wake up to it trending and so it was!

I've said this before but I honestly think that until after the VA trial there will be no JD new film projects. And he has to use that in VA to his advantage - look at what the lies have done to him.

It is incredible that the people are still with him, he is very loved.

We have no choice but to keep going - supporting Sauvage, SM, but most importantly watching his films on streaming networks - and of course those of us in UK - going to see Minamata. I am furious I will be on holiday when it comes out but will go multiple times once I am back. And we need to rate and review it on Rotten Tomatoes and any other sites.
Top
279 posts