Discuss the latest Johnny Depp news, his career, past and future projects, and other related issues.
47 posts

Lbock wrote:Good for him. I have lived overseas in Europe and Singapore. I think these commercials are very lucrative for US stars...especially the ones who so rarely will do any commercials. I hope he made a bucketful!

Behind the scenes video
Top

Here's the Ashani beer commercial + behind the scenes video:

A longer behind the scenes video:

Thank you all for the video links and thank you sparralet for the YouTube link.
~ MAGICK HAPPENS ~
Through the years, for the many xoxo's, giggles & kindness...
thank you & love you Johnny.
Top

*Not all treasure is silver and gold, mate.*
~Dearest Captain Jack, May your compass always lead you back to us...~
Top

By the Way, Johnny Depp Is Doing Beer Commercials in Japan

By Clara Olshansky
Food and Wine


The 'Pirates of the Caribbean' actor is trading his rum for Asahi.
Ever wonder what Johnny Depp gets up to when he's not filming Pirates of the Caribbean sequels and appearing in Harry Potter-verse spinoffs? Turns out he might be filming a beer commercial in Japan with a bird of prey and a Japanese rock star. Depp just appeared in a Japanese commercial for Asahi Super Dry beer, jamming on the electric guitar on a rooftop with Japanese musician and actor Masaharu Fukuyama.


According to RocketNews24, the commercial advertises Asahi's limited edition Super Dry Shunrei, or Super Dry Instant Chill, beer. The commercial touts it as a "one-time-only super dry." Sure enough, one of America's biggest movie stars and a Japanese music and TV star having a rock battle on a rooftop while a hawk and a helicopter watch definitely seems like a one-time-only event.

American celebrities doing commercials in Japan is such a thing that it's become the subject of many YouTube compilations and has been joked about on sitcoms like 30 Rock and Friends. Now Depp joins the elite ranks of Nicolas Cage, Arnold Schwarzenegger, Ben Stiller, Britney Spears, and so many others.

In the States, Depp has appeared in a number of advertisements, including Wild West-style cologne ads and a Pepsi commercial in the '80s. Once, in the late '90s, he was even asked to do a shampoo commercial when he was sporting a bald head. If 30 seconds just isn't enough time to watch Johnny Depp playing electric guitar on a rooftop dressed like a modern day Jack Sparrow, you can also watch the behind the scenes video here.

And if weird commericals that only air in Japan are your thing, you can also check out David Lynch's odd Twin Peaks coffee commercials. The ads featured the series' stars, like Kyle McLachlan and the Log Lady, shilling for Georgia brand canned coffee. Yes, there's pie.

Once, in the late '90s, he was even asked to do a shampoo commercial when he was sporting a bald head.

A huge thanks to everyone for the videos and pictures. Johnny looks amazing and so much happier now. Now I am on 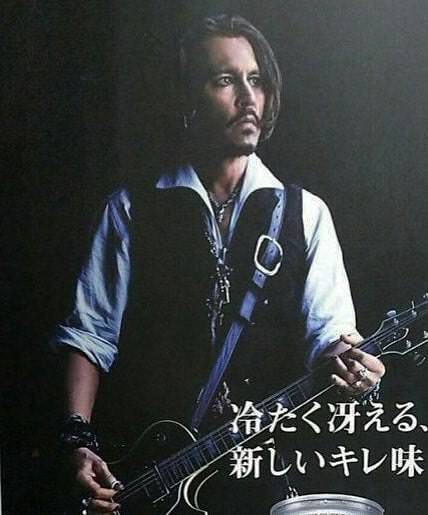 Great start to my day, what a dreamboat!
And Wit, was his vain frivolous pretence
Of pleasing others, at his own expense