Discuss the latest Johnny Depp news, his career, past and future projects, and other related issues.
8714 posts

I don't see any conspiracy about the "loss" of the "punch" video. The building managers were probably following or waiting for their lawyers advice. They allowed the lawyers and their third parties to look at the security video and nominate what they required saved. There was about 20 cameras each with 24 hours of video. The video is overwritten after 26 days. By the time the lawyers came to look, some days had already passed. The system was slow, the "punch" was quick and without the help from building staff, the lawyers missed it. Unfortunate but understandable.

Multiple people testify that they saw the video so it does not seem so bad that the video is lost. There are effectively multiple eye witnesses to what happened.

The depositions from Trinity Esparza and Brandon Patterson about saving of security video is in this file
https://www.fairfaxcounty.gov/circuit/s ... 1_2019.pdf
starting pages 193 and 305.
Trinity Esparza's comment about not being helpful is page 199.
She says her general manager told her she couldn't say anything about the footage.
Top

I’ve watched a YouTube stating that rocky and David heard have submitted cell phone data to JDs team. Lawyer said this is really hard to get unless it is voluntary so this could be a good thing for team JD of her supposed best friend in the world and her father are working for the JD side. It could however also be incriminating we won’t know until the evidence comes out.
Top

Boy that ex-really knows how to pick them. Her "legendary journalist" friend found a posting Gina did back in 2021, told the lawyers about it during trial and that's why she was dismissed. Also, Someone on SM got hold of the lawyer's response to JD's motion to have the friend removed and the lawyer said that the friend was in fact NOT a journalist, is the ex's girlfriend and she was not in the court rom.

First of all, the friend flat out bragged about being a "legendary journalist on twitter, even naming a few articles she has written. Secondly, the ex has NEVER identified her as a girlfriend. In fact, the friend posted that she stopped by the ex's house around the holidays and there was a Christmas party happening that she was not even invited to. To me she looks more like an assistant, always carrying the ex's bags and I believe she is paid for help (well, maybe a promised paycheck that will never co me) to trash JD and his fans on twitter. Thirdly, she was seen on the live streams sitting RIGHT BEHIND the ex's lawyer.

I think at this point, it's obvious the lies from that lawyer are never going to end.

I'm just going to leave this here after the ex's lawyer put in court papers that her friend is not a journalist. 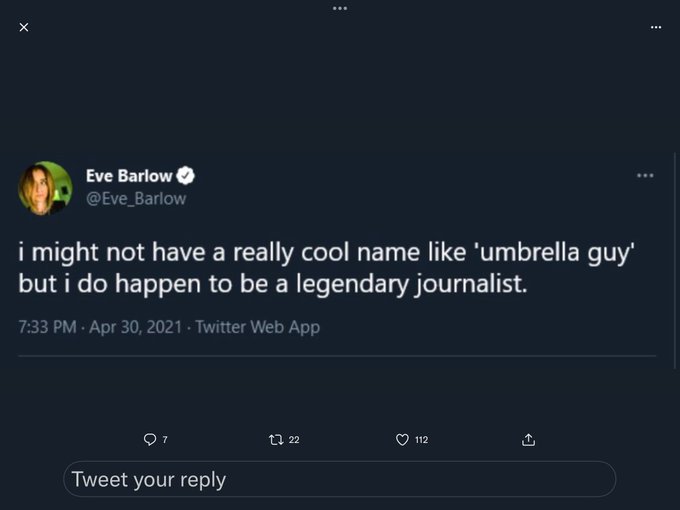 Sorry for lack of updates. It is exhausting. Here are exhibits admitted

Here is transcript re Gina Deuters and Eve Barlow

Great to see you in court Lbock. Stay strong and enjoy the proceedings - the posts are great thank you.

A few random thoughts:
As things unfold in Fairfax I am actually feeling less stress, rather than how angry I became following the trial (and initial verdict) in the UK. I think it’s because I’m hopeful that this will finally be resolved in Johnny’s favour.

But the UK verdict left a bad taste in my mouth and there is the concern that Fairfax may crash and burn on a minor technicality. It is my hope that with a jury rather than a judge, even if the article itself is deemed not technically defamatory (eg didn’t actually name Depp), the article caused defamation by triggering a response that effectively defamed him by secondary means (eg MSM, being publicly fired, public comments and interpretation of the firing, VAWA making Depp the epitome of violence against all women, Kaplan with TimesUP/MeToo etc). With the flawed testimony of her co-conspirators and the evidence against the ACLU it should be apparent that this was deliberate, calculated and Depp was their chosen target. The jury should see that Johnny was both a strategically selected victim and a weaponised scapegoat to further a wider political goal.

We know AH isn’t paying her own legal costs. The finger is pointed at Musk, but the ACLU probably has more to lose and there may well be a consortium of vested interests bankrolling her. Murdoch has no dog in this fight, but a Depp win could blow-back on him (and others) in the UK.

Elaine is incongruous in this scenario. If AH is well funded and claiming to be a victim of DV, why is she using a commercial lawyer better suited to reducing compensation rather than a DV lawyer to use a truth defence? Her “legendary journalist” is more like a loyal, love-sick puppy (that's just been put out of the house for an accident inside). And long-lost Christina Taft sitting in the front row of the gallery? I wouldn’t be surprised if geekdog and stirgus are lurking around too. I can understand Rottenborn backing his client from start to bitter end - like the Titanic EB mentioned in opening statements, the rats leave first but Captain Rottenborn has to go down with the ship. But what I can’t escape is the impression that AH is running on empty. Her friends deserted her long ago but will testify just to cover their own arses. She’s on a new batch of friends, and people that were near her are distancing themselves. Kilar and Sarnoff were brought in by WB to axe Johnny from FB (amongst other reorganisations) and were fired en masse with a slew of other execs a week before this trial began. WB are in a $160 billion hole and don’t need AH digging it deeper for them. Even The Guardian’s coverage seems to be edging towards neutrality, it’s almost like the writing is on the wall.

I get upset that the word “fight” is being used so much in court when referring to them both. It infers violence when they were just arguing – with words. AH would often follow with fists, but that’s documented, not just hearsay.

Newt wrote: ↑
Fri Apr 15, 2022 11:54 am
I think it's easy to get panicked when it's still early days. Yesterday was really, really tedious especially with Isaac being such a ball of fire the day before. Ultimately, Amber is a compulsive liar and also an idiot. Can't believe (thank god she did though) she admitted so many times to hitting Johnny.

Right, and let's not forget that even if a witness gets dismissed and/or their testimony (or part of their testimony) gets stricken from the record, the jury still heard what was said.

It is doubtful that anyone will remember what Gina Deuters said by the time the trial is over. Also, jurors take an oath and they take the oath seriously. If the judge tells them to disregard some evidence they will do so. This is from the state where I live, but all of the states have similar oaths. After the jury has been selected, the jurors must stand and take an oath or affirm that they will: 1) “well and truly” try the particular case for which they have been chosen; wait until all the evidence has been heard before making up their minds; and follow all of the judge’s instructions about the law and procedures in arriving at a verdict. The jury decides the facts from the evidence and the judge instructs about the law.
Top

Could there be a mistrial or will there be criminal charges due to what Eve Barlow did?
"This is the one I'll be remembered for"
Edward D. Wood, Jr.
Top

bringmethathorizon wrote: ↑
Sun Apr 17, 2022 2:42 pm
Could there be a mistrial or will there be criminal charges due to what Eve Barlow did?

If either side wanted a mistrial they probably should have asked for it at the time Eve Barlow was kicked out. What Eve and Amber did was improper but most likely not criminal.
Top

In a civil case the plaintiff has to prove their case by a "preponderance of evidence". Under the preponderance standard, the burden of proof is met when the party with the burden convinces the fact finder that there is a greater than 50% chance that the claim is true.

This is much lower standard of proof than a criminal case.
Top

Thank you Judymac!
"This is the one I'll be remembered for"
Edward D. Wood, Jr.
Top

INAL, so I'm not really knowledgable about the law. My understanding however is that each of the allegations made in JD's lawsuit will be addressed individually and a verdict given for each item (civil, so as Judymac pointed out, preponderance of guilt only needed to convict) - eg "we find her flabby arse guilty of defamation. She was guilty of assaulting JD multiple times without provocation or grounds for self-defense. We also find AH was the ringleader of an organised hoax to defame JD" (and then maybe name who they believe were her co-conspirators (including the ACLU)).

Maybe they can only decide regarding the defamatory article, but the claims made in JD's filing make a number of allegations, not just the defamation article itself. Others here - please correct me if I'm wrong.

Because of the way JD has run previous cases, expect that criminal charges will be raised as a result of the verdict. But the verdict is not required, just a nice touch. It is the evidence being tabled and verified by the court that is the real risk to AH. Law enforcement can use anything that comes up in this case (plus anything from their own investigations) to bring charges, and they know that anything that's been through the court already should be rock-solid from a legal standpoint. Their job is much easier too because JD's team (and us) have done all the hard investigative work.

The Australian Government will be watching closely to build their case of attempting to suborn perjury. In fact, when AH plead guilty to perjury, she probably perjured herself again by putting out there that it was just a simple mistake, blah, blah, blah.

Anything to do with the hoax will be of interest to US authorities, especially the ACLU connections. If any link is found between AH and ERW over their respective allegations it could even be interpreted as a racketeering issue (imo).

And any criminal charges that come out of this case are not on JD's dollar, it is the responsibility of the State to pursue.
Top