Discuss the latest Johnny Depp news, his career, past and future projects, and other related issues.
311 posts 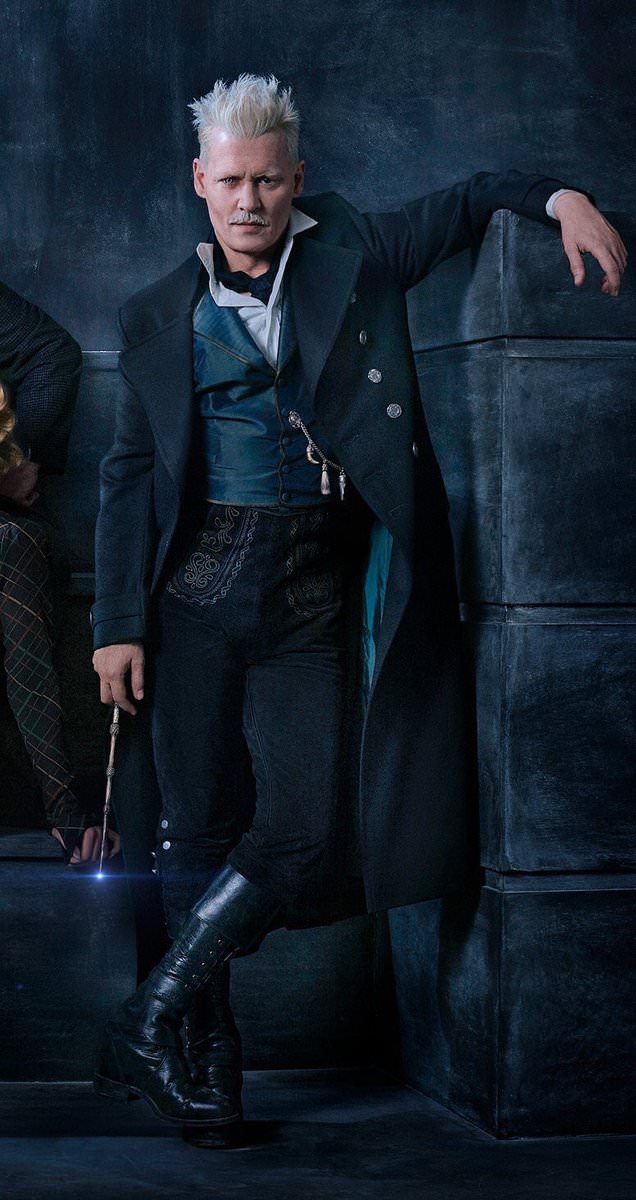 Thank you, Chocolat.
"I feel sullied and unusual..."

"What do I want for the future? I know exactly what I want, everything: calm, peace, tranquillity, freedom, fun, happiness. If I could make all that one word, I would - a many-syllabled word."
Top

On the other hand, Johnny's costume looks like we're going to see some action from him: the boots, the undone coat, high waist, fitted trousers - I mean, he doesn't look like the type of villain that would just sit in his cave and plot, but fight in the first line if the need arises, if you know what I mean. I see he still has different coloured eyes, too. Was that in the books? I don't remember reading anything about that.
Also, I love that the sequel had Grindelwald in the title: it gives me hope that we're going to see a lot of Johnny

So excited! Thanks everyone for the updates and pics!

Lots of very, very toxic comments by both “writers” and potential viewers re: Johnny’s (continued) casting. Abuse, abuse, abuse. It makes me sad to my core to know how hard Johnny, his agents, and film makers have to fight to justify hiring him these days. Can’t imagine what these ignorant herds will be like when he’s actually headlining a project ready to be released (I’m thinking “Richard Says Goodbye” in particular). Off topic a bit, I know, and just love the new pics . . . can’t seem to ease the ache, though.
"Stay low." ~ JD
"I don't like it in here . . . it's terribly crowded." ~ Hatter
"There's something about Johnny that breaks your heart." ~ John Logan, ST
"Tear deeper, Mother." ~ Wilmot
Top

Well, Amber did her job...she made the accusations and leaked all kinds of made-up crap. Made sure People magazine put her pic, with bruised eye on the cover. She didn't have to go to court to swear on anything...she made sure the public convicted him with no pesky swearing, in court. So there it stands, and with what is going on in Hollywood today, it makes him a bit toxic.
I know fans say he did the right thing by ignoring it, but it will affect his career, and how the general public feel, from now on. So now,
one of the nicest guys in Hollywood is branded with the title of abuser. The best we can do is not to read any comment sections.
Top

sleepy wrote:The best we can do is not to read any comment sections.

I agree, and go one step further -- we could stop giving these sick comments attention on the Zone.
Top

sleepy wrote:The best we can do is not to read any comment sections.

I agree, and go one step further -- we could stop giving these sick comments attention on the Zone.

Yeah, but then again one sometimes get surprised - by how much the commentators are on Johnny's side. Not always, no. But I have seen it on a couple of the badest articles. And have protested once or twice myself. So the "journalists" can see, if they care to read the comments, that not all agree with them, and hate Johnny.
Top

And also keep in mind what we perceive and the reality of the Hollywood machine are not the same thing.

He's hired because he is so talented and Johnny is still very popular. All the bad publicity did not stop Pirates being a huge hit or keep audiences away from MOTOE. You may have missed the other news today but Sauvage is going to be by far the biggest selling men's fragrance for the second Christmas in a row and even the Daily Mail had to acknowledge that this is due to 'the Johnny Depp effect'. It is the only successful male fragrance launch in recent times.

The horrid criticism comes a lot I believe from people in the US and Europe - and of course Johnny is hired because he has such strong appeal outside the traditional western markets which are expanding in terms of cinema audiences.

It's awful background noise but we have to stay strong and focus on all these positive signs.
Top

Just to direct this thread back toward the Potterverse - I have a two-words response for every J.K.Rowling fan who is upset with Johnny Depp casting in the film: Rita Skeeter.
Top

tralala wrote:Johnny's costume looks like we're going to see some action from him: the boots, the undone coat, high waist, fitted trousers

Grindelwald's face seemed a little rounder to me in the bits from the first movie. In this new picture, it looks like his incarceration has made him a little leaner and hungry for trouble... interesting how he's got just one contact lens. The other eye appears to be Johnny's own. Someone said they don't remember if that was in the books. If not, it's a choice for the character. Very similar to David Bowie's different coloured eyes, also seems to pop up in cats now and then.
"There is certainly a part of me that tends to be that loner. You never find me in the center of the crowd. I just like to stay back a little and hang in the shadows."
Top

I love the way this man wonderfully wears costumes.